Crookes dazzled the scientific assembly with effects so extraordinary that they rivalled the spectacles produced by spiritualistic mediums, expanding the physical horizons of this world so that they seemed to nearly converge upon the next, a fact Crookes subtly proclaimed in his speech to the Association:

‘We have seen that in some of its properties Radiant Matter is as material as this table, whilst in other properties it almost assumes the character of Radiant Energy. we have actually touched the border land where Matter and Force seem to merge into one another, the shadowy realm between Known and Unknown which for me has always had peculiar temptations. I venture to think that the greatest scientific problems of the future will find their solution in this Border Land, and even beyond, where it seems to me, lie ultimate Realities, subtle, far-reaching, wonderful’.

William Crookes (In a Presentation at the annual meeting of the British Association for the Advancement of Science at Sheffield in 1879, when he unveiled his Crookes Tube).

Visions of the Industrial Age, 1830-1914 Modernity and the Anxiety of Representation in Europe Edited By Amy Woodson-Boulton 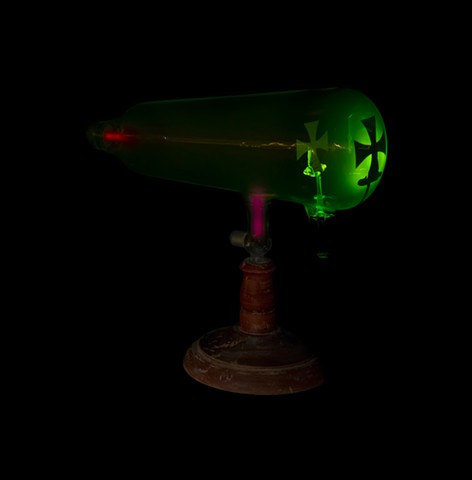 Where Matter and Force Seem to Merge.
pigment print on paper
< previous next >